Many people ask why some substances have received shorter penalties than others, for instance on Jon Jones getting  one year suspension, while Gleison Tibau for instance received two years. I will try to explain.

In addition, for testing conducted in competition there are further categories S6-S9 (There are also P1-P2 for certain sports).

For example, Salbutemol and other medications for asthma and other breathing disorders.

This includes Aromatase inhibitors such as Androstane (S4.1), Selective Estrogen Receptive Modulators (SERMs) such as Tamoxife (S4.2) and Anti Estrogens such as Clomiphine (S4.3)

One of the vagaries of the WADA system is that masking agents are considered in a lesser manner than the drug they are used to mask.

S6b – Stimulants (In competition only)

S7 – Narcotics (In Competition only)

Morphine, methadone, oxycodone and other narcotics.

S8 – Cannabinoids (In Competition only)

S9 – Glucocorticoids (In Competition only)

Cortico-steroids such as Cortisone, commonly used for injury recovery, but have been abused in some sports due to their weight cutting properties 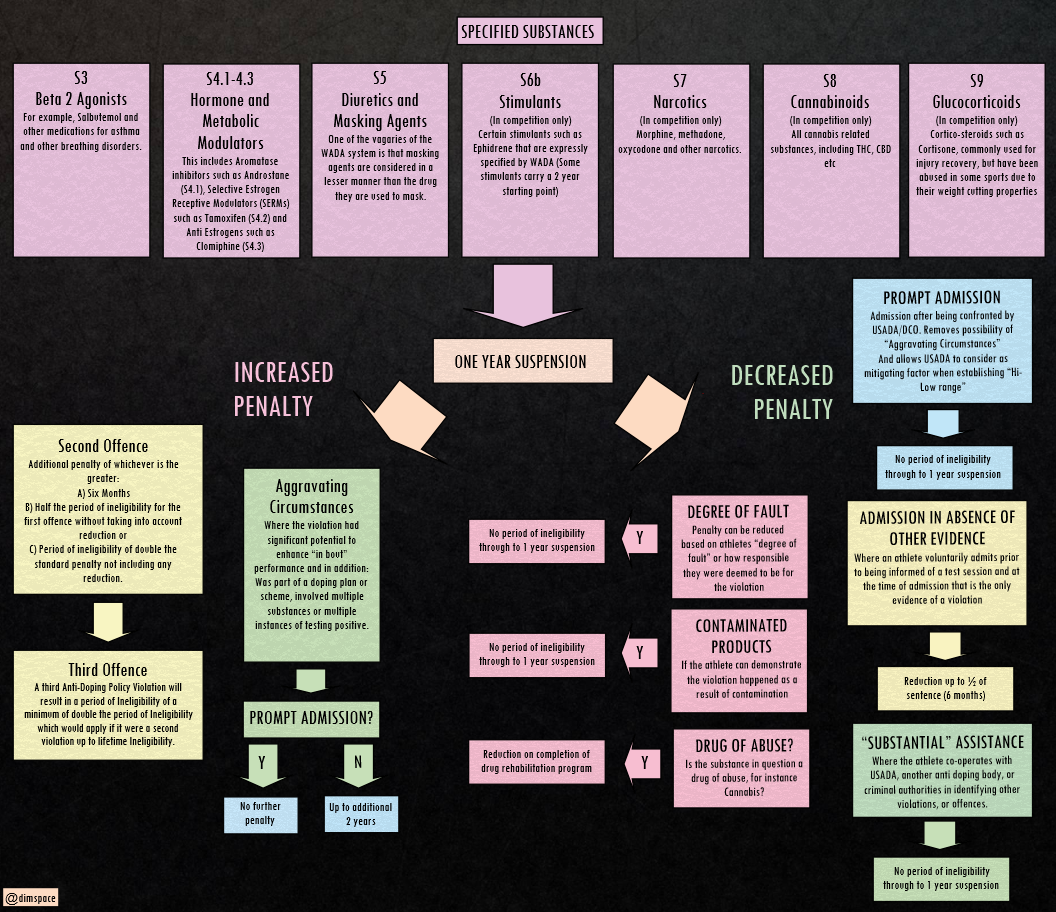 With new substances constantly being developed this is WADA’s catch all category for anything that is either not approved by the FDA or relevant body in whichever country, still undergoing clinical trials or pre-clinical development, or anything aimed for non-humans, veterinary purposes etc.

A small subsection that includes such substances as Meldonium and  Trimetazidine.

S6a. – Stimulants (In Competition only)

Some stimulants, not expressly “specified” by wada. Includes amfetamine, cocaine (Note that cocaine is a stimulant rather than a narcotic).

This includes any methods associated with blood doping (M1), IV’s and other methods intended to physically manipulate chemical elements in the body with a view to fooling doping controls (M2) as well as gene therapy (M3). 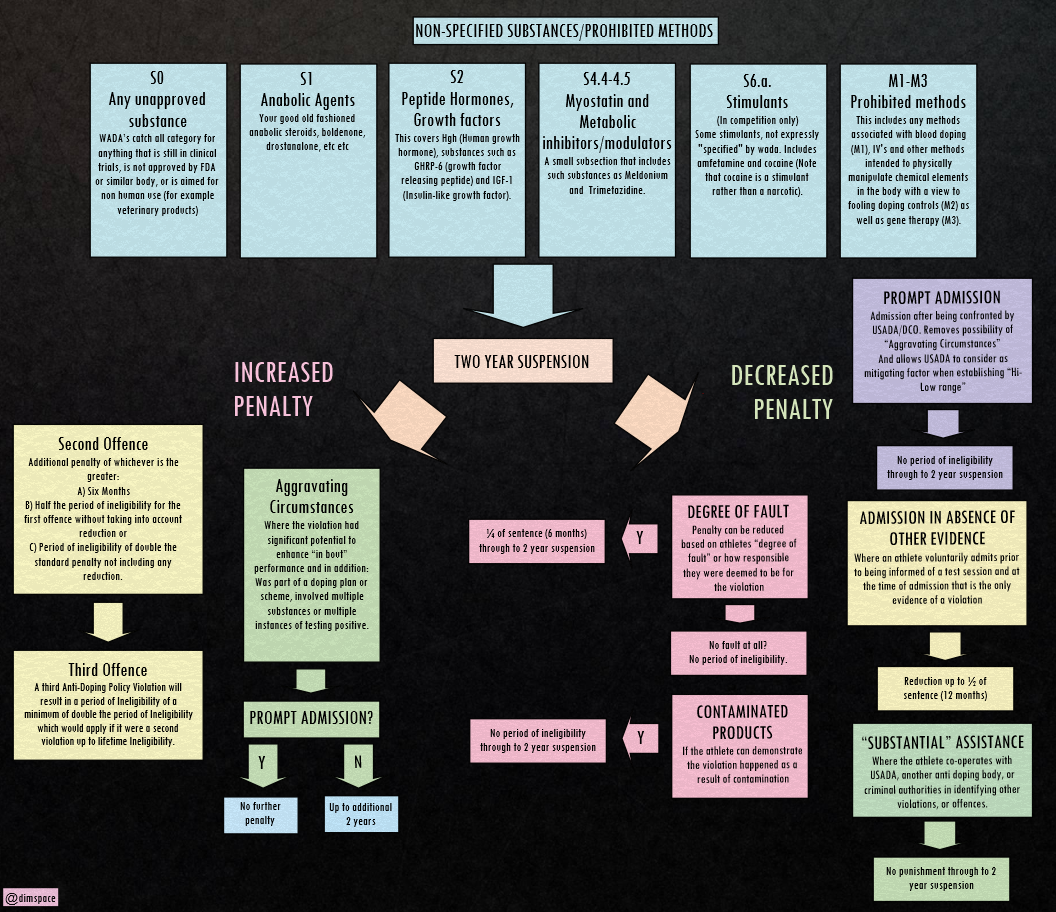 Other offences that draw suspensions

Any combination of three Whereabouts Failures within a twelve-month period. This is subject to a potential reduction down to as little as 6 months depending on the athletes degree of fault. Note that athletes who regularly change their whereabouts and make it awkward for doping control officers automatically cannot get a reduction.

Conduct which subverts the Doping Control process but which would not otherwise be included in the definition of Prohibited Methods (ie. outside of chemical and physical manipulation of sample etc). Intentionally interfering or attempting to interfere with a Doping Control official, providing fraudulent information to UFC or USADA, or intimidating or attempting to intimidate a potential witness.

Possession of a prohibited substance or method (UFC ADP 2.6) – 1-2 years

The athlete, or athlete support personnel being caught either with prohibited substances or for instance IV paraphernalia. Generally a 2 year ban, this can be reduced if it involves a specified substance.

Administration or attempted administration to an athlete a prohibited substance or method (UFC ADP 2.8) – 4 years to life

Association by an Athlete or other Person in a professional or sport-related capacity with any Athlete Support Person who is either subject to a USADA suspension, or suspension/investigation from any other body in a way that would constitute a USADA violation. The ban of 2 years may be reduced to as low as 9 months depending on circumstances. 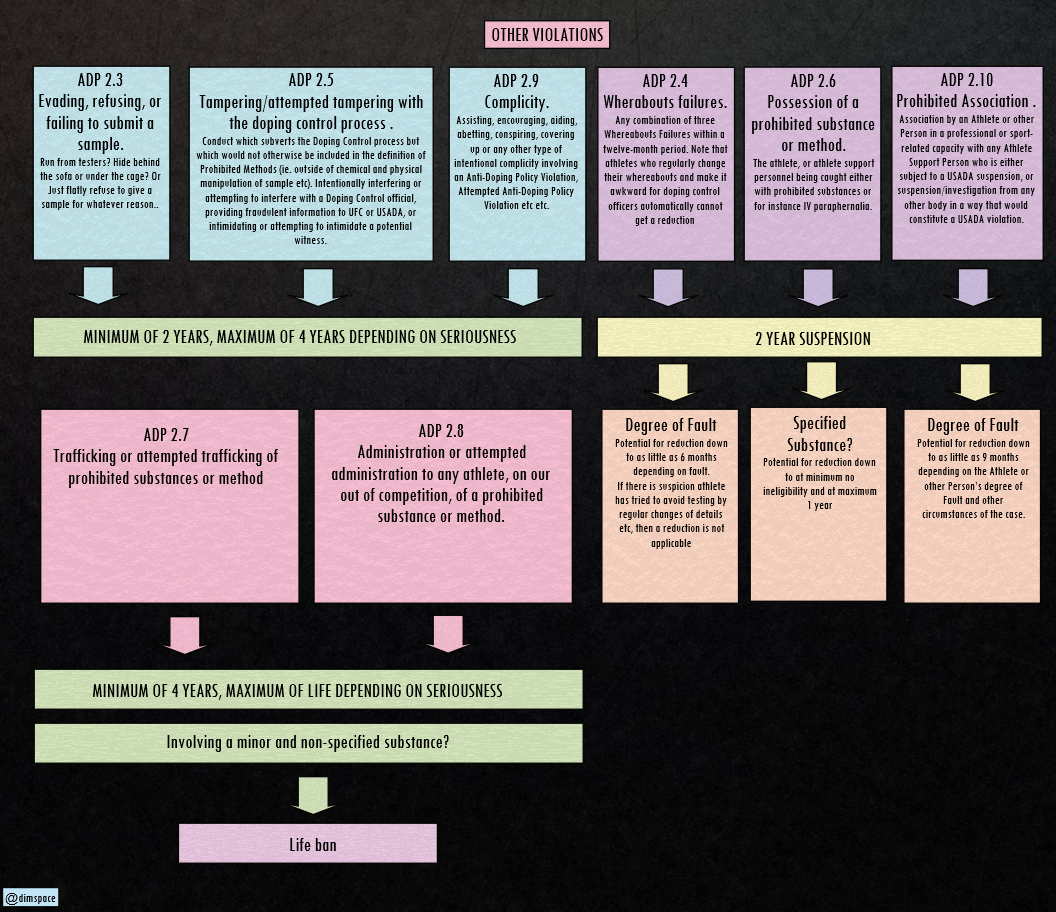 Reduction based on degree of fault/Contamination:

Or as Cro-Cop would put it “The Snitches Clause”. This usually comes into play for instance if an athlete has been supplied ped’s by a doctor and his assistance leads to the doctor being charged for either widespread doping or with a criminal offence.

Prompt admission of an anti-doping violation

Admission in absence of other evidence

Admitting ped use or a violation prior to being informed by USADA of a test session.. Ony happens if an athlete takes PED’s and then racked with guilt decides to confess.