“We are a self-supporting cottage industry of knowledge, forums, Twitter thinkers and doers. We all have a certain amount of responsibility. This collective mind has created something and it must be nurtured and sustained because it seems pretty clear to me that most of the established truth-pimps are happy with the status quo.” – L’arriviste 2013

Some years ago I wrote a piece on Cyclismas about responsibility.  Responsibility as cycling journalists, as bloggers, or as social media commentators. Four years later its something that maybe the MMA community would do well to take on board.

In many ways the MMA community at the moment parallels the cycling community of the nineties and early parts of this decade. A mixture of journalists, some questioning, some enquiring, while some, wary of losing the privileges the position affords them eager to pander to the fighters, the managers, the agents. More grateful for a titbit of information than to question that information, check the validity of that information, or indeed, question why they are being given that piece of information. Cyclingnews becomes MMAFighting, Velonation becomes BloodyElbow, NYVelocity becomes that upstart MMA blog site that nobody will talk to. The names and the places all change, but the story remains the same.

Yesterday news broke that Jon Jones had passed a post fight blood test in regards his fight at UFC 215, and this was heralded as perhaps crucial new information, tweeted by no lesser an influence than Ariel Helwani, and written up on MMAFighting suggesting a breakthrough in Jones’ defence.

Within minutes the word was out. Helwani’s tweet rt’d more than 2000 times, Jones passes his test, all over twitter people suggesting that Jones would be declared innocent. The article on MMA fighting did nothing to suggest any different. He had passed a post fight test, the day after his failed test. That was the story.

Jon Jones passed his blood test right after UFC 214, according to multiple sources. This was 24 hours after the positive test. More coming.

Partner site to MMAFighting, MMAMania even went as far as to declare Jon potentially innocent.

Of course, this wasn’t the case. Within minutes of the article being published people were contacting Shaheen Al-Shatti, Helwani, and MMAFighting telling them that the news was largely irrelevant as blood is not used to identify Turinabol, the substance Jones had earlier tested positive for.

One hour later the article was edited 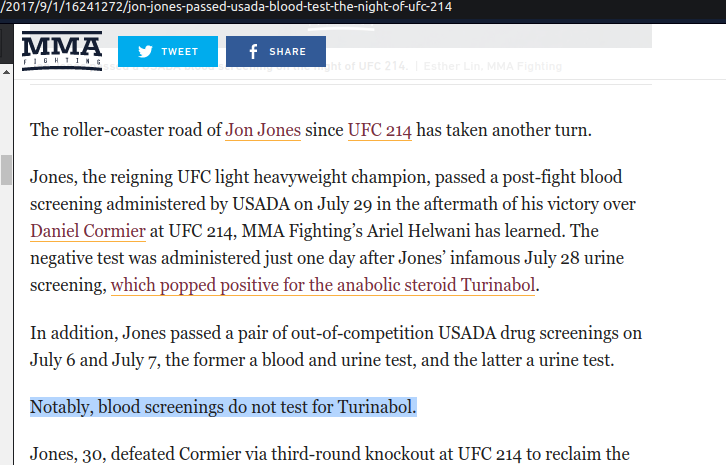 Ariel would tweet something of a correction attributing the additional information to “sources”, but by now the damage was already done.

According to sources, substance Jones tested positive for in his 7/28 urine test usually only shows in urine. 7/29 was blood. Developing…

While more than 2000 people would re-tweet Ariel’s original comment stating Jon’s test was negative, only 200 people re-tweeted his correction detailing that a blood test would not be positive for Turinabol anyway.

An hour later, the MMAFighting article changed again, this time reflecting an accurate account of what the negative blood test actually meant,

But still, it was too late, the damage was already done.  The word was out, Jones fight night test was negative, that casts doubt on his positive test, USADA has screwed up, Jones is innocent, FREE JON JONES.

Backstage, unseen by the camera’s Malki Kawa afforded himself a smile.

Did Shaheen Al-Shatti and MMAFighting get played? Hell yes. The information on the negative test undoubtedly came from someone in Jones’ camp and was released to cast doubt on the testing process, to raise questions. And it worked.

Did MMAFighting publish knowing it was misleading? Almost certainly not, but their enthusiasm to break the story, and to a degree their enthusiasm to play ball with Jones and his team, meant that they did not check the story thoroughly before publishing. Will they make the same mistake again? Almost certainly, as they (and others) readily accepted and published quotes and statements from Kawa and Howard Jacobs in 2016, statements that almost to a word got proven false when the final reasoned decision was released.

Are they the only ones guilty of this, hell no, nearly a day after the event MMAMania’s “INNOCENT?” article still sits on the front page despite an article two inches above it on the very same site contradicting the claims.