The Continuing Saga of Mir’s Metabolites

On Friday it was announced by USADA that Frank Mir had been suspended for two years following (multiple) positive test(s) for Turinabol Metabolite M3.

Today on phoneboothfighting Frank spoke out about the case and his thoughts on the whole saga. I’m going to summarise the main points he raised and give my thoughts on them.

Turinabol, Trace Metabolites and the Frank Mir Case).. – my piece looking at the background to the new turinabol test, questions about the methodology, and how it applied to Frank.

Disclaimer: I was offered the opportunity some months ago to appear on Frank’s podcast and have an unrestricted line of questioning with nothing off the table. I didn’t follow up on the offer (for various reasons but mainly due to being slack), but its important to note that Frank was willing to be quizzed on the case.

Richard Hunter: Up until recently you were under the impression that because 6 weeks prior you had had a clean test, and if that one was clean and the post fight test was not then you had a 6 week window to focus on, your position being you hadn’t knowingly taken anything.

Frank Mir: I was in the boat as many other athletes such as Means, Romero, where I didn’t take anything, but something got into their system. USADA was able to pinpoint it by saying “you didn’t have something in your system at this point, you did at this point, you have a to b, figure it out”. The first time I failed they told me without doubt, “it wasn’t in your system in February”, now they tell me they took it to a different lab. That’s why I got so fanatically and obsessed about the timelines, knowing that if this drug had been introduced to my body at a certain point.

When a urine sample is received it will receive a basic screen, a steroidal profile will be built from the sample for the biological passport and then it will be analysed for a selection of substances based on either prior intelligence, a strategic method for instance if a fighter is 3 weeks out from a fight then certain drugs are more likely to being used than others, or whatever other strategy USADA choose to employ. 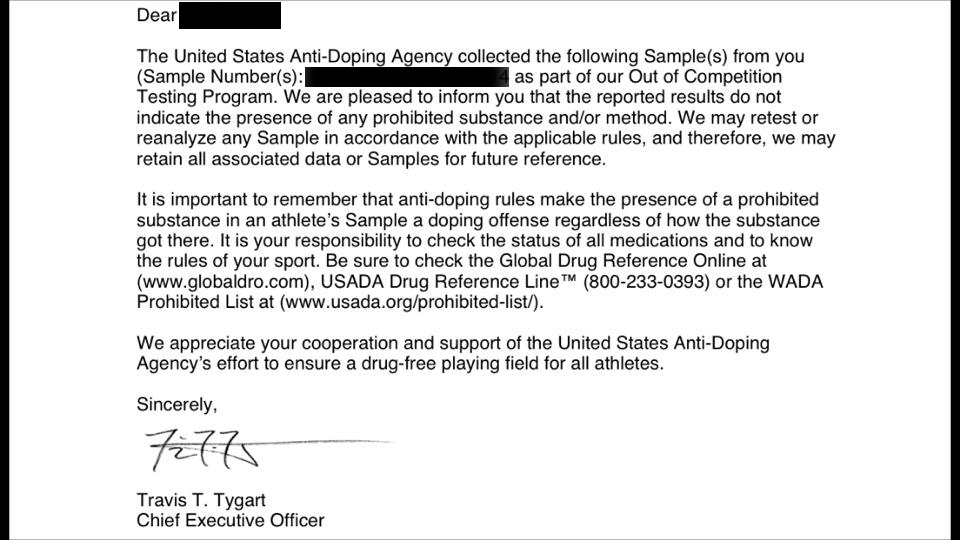 The key thing to note in these letters, “We may retest or reanalyze [sic] any sample in accordance with the applicable rules, and therefore, we may retain all associated data or samples for future reference”

We come to his second sample which was sent to the Wada accredited lab in Tokyo. On this occasion the sample was analysed using the new Turinabol metabolites test and was found to be positive. At this point, in line with their policy of being able to go back and test old samples USADA returned to Frank’s prior out of competition sample, analysed it using the same method employed by the Tokyo lab, and it too, was found to be positive.

FM: The player Chris Colabello called me up, basically in the same situation as several other athletes and now they just released in the number four largest news agency in the world, number one in Russia, the deputy prime minister is now saying the guy who invented this test is being sued by several athletes saying that “they can find it [the metabolite] in coffee”

For me this is where Frank starts to maybe conduct the orchestra a bit.

Some background: The guy who created the test for Turinabol was also the guy who was responsible for the doping programs of many hundreds of Russian athletes, and until 2012 the prime ingredient in his doping cocktail “the duchess” was in fact, yes, Turinabol. Once his paper was published he replaced Turinabol in this mix with Trenbelone to avoid detection.

Some years later he (Grigory Rodchenkov) became a whistleblower for WADA, revealed the extents of the doping program in Russia (you’ve probably read about them breaking into the lab and passing samples through holes in the wall to replace with clean samples) and basically has become enemy number one in Russia.

With his Turinabol test ratified, WADA and the IOC started retroactively analysing samples from the 2008 and 2012 Olympics and so far there have been more than 100 positive tests, almost exclusively from Russian athletes or athletes from former Soviet states, this in turn led to countless athletes being prevented from appearing at the Olympics in 2016 and multiple Russian medalists being stripped of their titles and banned.

FM: They are saying this test isn’t that accurate and USADA may have jumped on it too soon before it had proven itself. Now there’s this guy saying we don’t know about these metabolites, what causes a false positive or even after how long this false positive can occur.

In July 2016 Arthur T Kopylov of the Institute of Biochemical Chemistry, Moscow had published his report entitled Novel metabolites of turinabol: WADA moving toward illusions.

These issues are described in our critical review of the method for detection of long-term metabolites of turinabol, and altogether lead to the main conclusion of inability to apply the method in its current state, thus, the results cannot be absolutely believable and require a careful revision by wide scientific community. – Arthur T. Kopylov – July 2016

Now it could immediately be argued that Kopylov, as a Moscow based scientist and with his paper being cited by a large number of Russian athletes in their defences against doping charges could raise questions of his impartiality, but he does address several issues he has with the methodology and the implementation of the new procedure.

And herein lies the problem. Its not unthinkable that a nation disgraced in sport, with a large percentage of its medallists stripped and banned, would pay attention  to a scientist willing to speak out against the very test that caught them.

Several athletes have used Kopylov’s papers in their defence, including the IOC hearing in the case of cyclist Ekaterina Gnidenko . She was represented by Artem Patsev who has represented many Russian athletes and has relied on Kopylov’s papers. On the other side, appearing as an expert witness was Prof Martial Saugy of the Lausanne Anti-doping Laboratory who’s primary role was to explain (and defend) the methodology, as it was the Lausanne lab responsible for the retesting in the case of Ms Gnidenko.

In total the IOC held three hearings, all of which featured the testimony/evidence of Saugy and Kopylov making the following findings:

Theres no doubt whatsoever that the newly implemented Turinabol test does detect Turinabol. The number of positives from athletes known to be on a drug cocktail including Turinabol is too big to ignore, Kopylov’s argument is that its yet to be proven that the ONLY source of Metabolite M3 is Turinabol.

FM: If they are saying the metabolites were in my body in February it could go back years. I’ve got to back years, you’re talking 2 years from date of the test, 3 years from now, I’ve thrown shit away I don’t even remember.

This is an area where Frank does exaggerate a little. How long the metabolite remains in the body after administration is, to a degree unknown.

The window of detection has moved out to, typically, several weeks, and in some rare circumstances up to months after administration – Daniel Eichner (Head of SMRTL)

It’s certainly weeks, consensus seems to be that it could be months, but years? Probably pushing it…

FM: The other demon I’m facing is this test might not even be a legitimate test, there could be problems with it, why is this one being flagged more than any other one by athletes saying “I didn’t do this shit”

The simple answer is, Turinabol was the key ingredient of a Russian doping cocktail for more than five years, and retroactive testing has caught more than 100 athletes. Thats why there are so many positives, when a new test comes out we very often see a rash of positives. We saw it with the EPO test, with the test for second generation EPO (CERA). Granted, we have never seen it on this scale with hundreds of athletes testing positive, but then there has never been a situation where a lab has said “Here’s a new test, and by the way, we’ve been doping athletes with this product for years”

For much of the rest of the show Frank and Richard go over the same ground, while also discussing the wada program in general. You can listen to the full show HERE

Its really hard to know what to make of the case. In my extensive research for my original article I found plenty of claims that the test was flawed, but I found myself unable to escape the thought that this was a huge doping scandal, whistleblowers, KGB involvement, a fairly huge conspiracy and finding a scientist and a lawyer to argue against the test wouldn’t be difficult.

The whole issue is such a political disaster from a Russian point of view its hard to take seriously the claims of any Russian scientist, lawyer, or even athletes, but at the same time they cant be totally discounted just because they are on one side or the other.

Did Frank ingest oral Turinabol. In all likelihood, Yes.

Did Frank “deliberately” ingest oral Turinabol? Only Frank knows the answer to that one.

But politically, the whole saga is fascinating.